The sport of wrestling goes back thousands of years, and was one of the events at the first modern Olympics in 1896. The successful San Marino High School wrestling program contributes to the rich tradition of the sport, and that excellence is represented by notable alum, Evan Wick (SMHS Class of 2016). 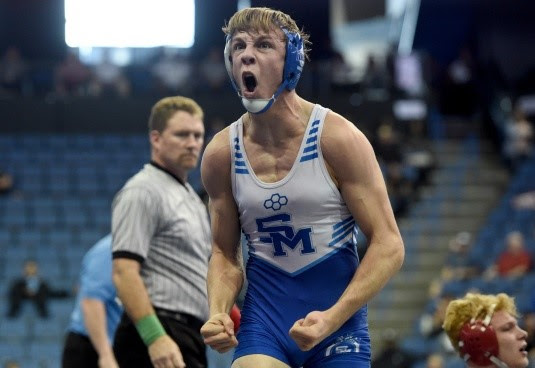 Evan was named USA Wrestling Athlete of the Week on December 21, 2022 following an 8-2 win over 2022 World Bronze Medalist, Vasyl Mykhailov in San Marino on Dec. 18. His victory helped Team USA overcome Ukraine 5-4 in the Beat the Streets LA dual meet hosted at the Barth Athletic Complex on the Huntington Middle School campus. This honor is the most recent of numerous achievements for the four-time NCAA All-American and Team USA wrestler.

Evan and his twin brother, Zander, were both state champions their senior year at San Marino High School, leading the Titans to a sixth place finish at the state tournament. Evan continued his wrestling career at the University of Wisconsin, and also began competing for Team USA. He capped his NCAA career in 2022 with a Pac-12 championship and 3rd place finish in the NCAA tournament for Cal Poly San Luis Obispo, where he recently accepted a position as assistant coach for the wrestling team.

It is very special that USA Wrestling has recognized a Titan wrestler representing the United States. The San Marino High School community should also be very proud of Evan’s achievements and continuing success in the sport of wrestling.

See the USA Wrestling website for more about Evan Wick.

or
Please check your e-mail for a link to activate your account.